What is Hyper Spectrum?

What is a hyperspectral camera

What the spectrum makes possible

Our own spectroscopic technique

Light is a particle as well as a wave. The color of an object changes according to the wavelength of this light wave.
By analyzing the spectrum, you can discover the characteristics or state of the object.

Light is a particle as well as a wave. From the standpoint of the wave theory of light, the color of an object changes according to the kind of this light wave. Human beings perceive specific light as colors. For example, red corresponds to long wavelengths and violet corresponds to short ones. By analyzing those wavelengths, you can discover the characteristics or state of the object.

Light rays are distinguished by their wavelengths. We usually use “nm (0.000000001 m)” as a unit to express a wavelength. Wavelengths of visible light lays are between around 380 nm and around 780 nm.

The mechanism of human light perception

Human beings have three types of color-sensitive core cells in the retina of an eye, corresponding roughly to red, green and blue sensitive detectors. They can perceive colors by catching reflected light from objects. For example, the reason why human beings perceive strawberries as red is that they absorb the blue and green light wavelengths and reflect red one.

What the spectrum makes possible

By utilizing the spectrum, you can evaluate the characteristics or state of an object in a non-destructive and non-contact manner.

<Possibilities of the spectrum>

By analyzing its unique spectrum of an abject (spectroscopy), you can evaluate the characteristics or state of an object which is difficult to do so with human eyes.
For example, you can identify the kinds of resins, oils or powders, which is impossible with human eyes as shown in the right figure.

Therefore, this spectrum technology is utilized in every situation regardless of fields or industries. 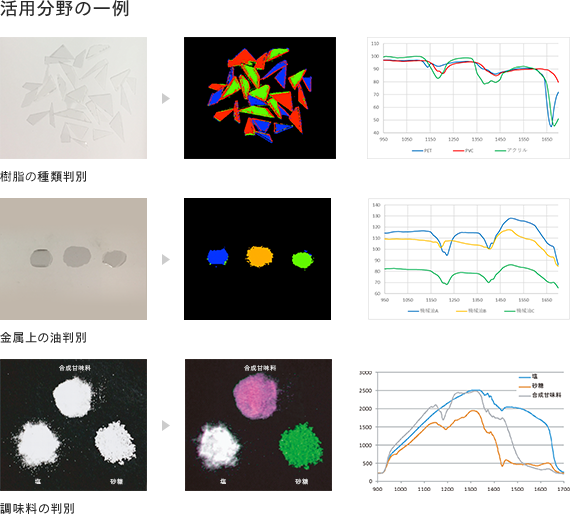 Our hyperspectral camera dose not require an external scanning instrument in order to acquire spectral images. It is an epoch-making spectral imaging system (patented).
Pursuing the customer usability, our camera can be utilized in broad situations such as imaging with a microscope, outdoor imaging and so on.

It is difficult for conventional spectroscopic techniques to acquire spectral images without other instruments because they acquire spectrum data of one point or one line of an object.
In the first place, a point spectroscope cannot compose an image. On the other hand, a line spectroscope requires either itself or an object to move at a regular speed to compose an image. Therefore, it requires an external scanning instrument, which makes the system large and limit the operating environment.

<Our own spectroscopic technique>

Accordingly, in order to solve those problems, we developed a new hyper-spectral camera which can acquire spectrum information for each pixel of an image quickly independently by installing a compact scanning instrument inside the camera. 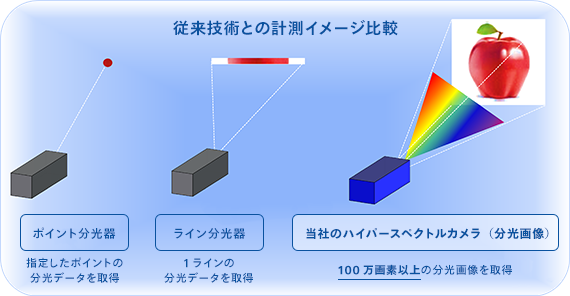 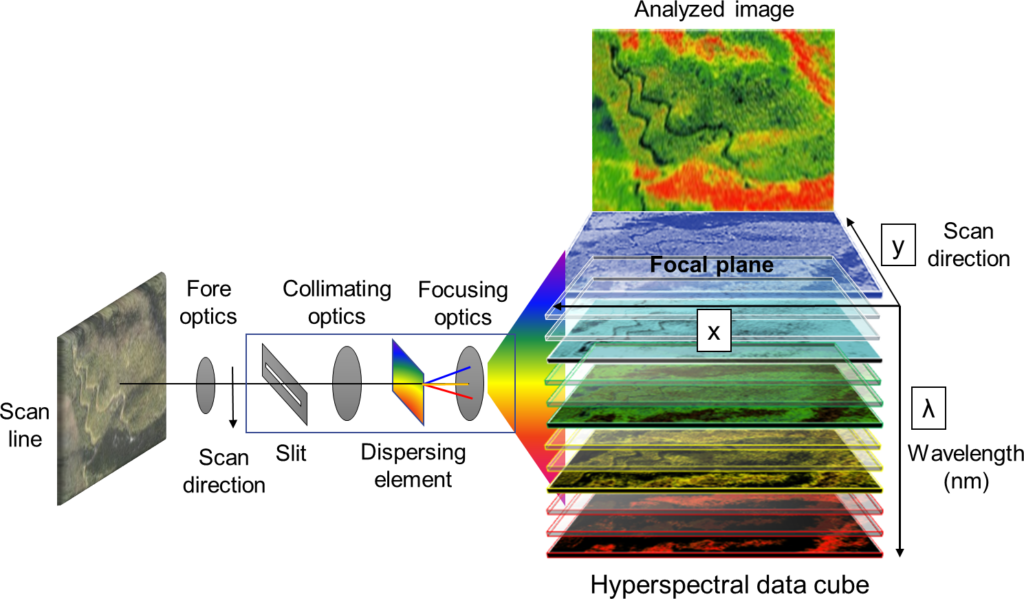 A hyperspectral camera is a camera which can evaluate the characteristics or state of an object in a level where human beings normally cannot perceive by dividing the light into fine bands.

<What is a hyperspectral camera>

As mentioned earlier, human eyes and normal color cameras perceive the visible light in three colors. By dividing the light into fine wavelength bands, the difference of characteristics of an object which is difficult to evaluate with human eyes or phenomena which is impossible to be seen can be visualized. In case of the red coating in the right figure, the left image looks red uniformly. However, by analyzing the spectrum, coating unevenness which is difficult to evaluate is visualized as shown in the right image. This is an example which evaluates the subtle difference of the spectrum between the thick part and thin part of the coating which human eyes cannot perceive.

With this technology, you can visualize objects or phenomenon which has been difficult to evaluate objectively. 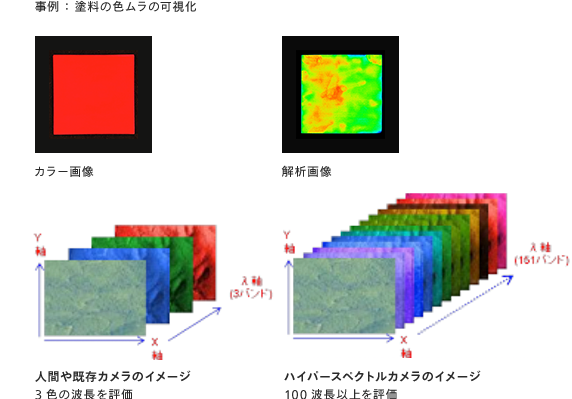